My focus is on the fine arts and architectural / sculptural potential of kiln formed glass, using more advanced and complex techniques, exploring design, composition and colour theory, with the ability to conceive layers of process and material application.

Artist Keith Sheppard who is based in Moyallan, Co. Armagh in Northern Ireland established his glass  art studio in 2011. The business specialises in the production of kiln formed glass art and focuses on the development of high-end bespoke pieces. The pieces predominantly involve the infusion of metals into glass; and this process gives each piece a further dimension of uniqueness and identity with enhanced vibrant colourations.

Glass Art pieces are both Corporate and Gallery orientated and selected items can also be viewed at;

Keith Sheppard originally comes from Devon in South West England. In keeping with the raw elemental aspect of this part of England, all his life Keith embraced the outdoors in the most adventurous of situations. This aspect of Keith’s life was curtailed in 2009 after a life threatening skiing accident.

Keith sustained a Spinal Cord Injury, initially paralysing him from the waist down. Faced with the medical opinion that the probability of walking again was less than 3%, almost seven months later, Keith walked out of Hospital and drove home to start his Artistic life. – And so ended the life of the adventurer and began the life of an Artist.

Keith is a relatively new Artist having trained in both Ireland and England over the last 4 years. He predominantly works with Copper in glass to create bespoke vases and bowls, but more recently, he has been involved in creating individual unique sculpture pieces for gallery display.

As the metal fused at vertebrae C6/C7 this keeps Keith walking and so preserves that aspect of his active life. Keith’s Art explores the possibilities of fusing the improbable to create objects which are remarkable, interesting and life affirming – that is; glass fused with metals in a kiln at temperatures of up to 810+ C.

His expanding development shows originality and energy, – his body has been irrevocably changed by nature: his Art shows a similar but in this case a positive metamorphosis.

“In a relatively short period of time I have been catapulted forward, accelerating my individual creativity and exploitation of the qualities of kiln formed glass. Whilst practising and experimenting with different techniques I was excited by my intentional and accidental outcomes. By bringing glass and metals together I have attempted, not only to express my individuality, to define each piece’s functionality, but also to create a strong visual attraction to ‘touch and feel’ the nature, outline and identity of each piece.

I am extremely excited with recent developments, particularly with my new large sculpture pieces and my goal is not only to make work that is certainly possible to be used functionally but also to cross the boundary of function to that of a work of art.” 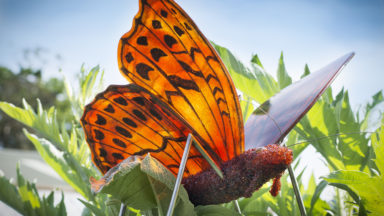 Other Posts by KEITH SHEPPARD